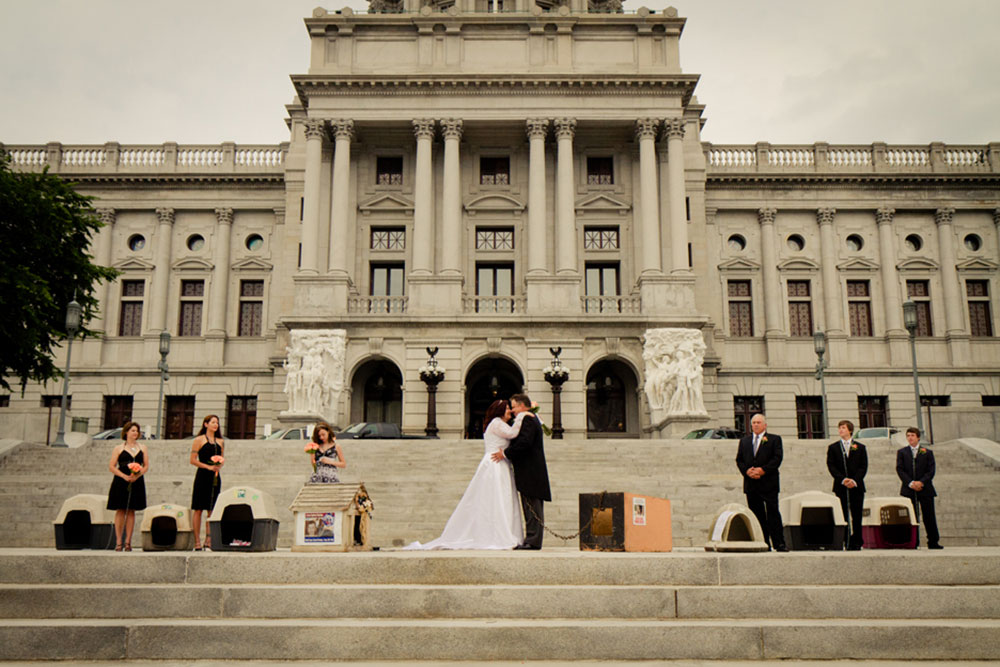 The photo you see above is the doghouse wedding Tamira planned in 2011 for herself and now-husband Joe. The wedding was held on the steps of the Pennsylvania state Capitol building after a day of Chain Off, where more than 40 people came and chained themselves to doghouses advocating for better state laws for chained dogs.

Most stayed to get a look at what was most likely the first (and last) ever doghouse wedding.

While it's true that many men end up in the doghouse after the wedding, in this case the groom started his marriage already in the doghouse...Joe jokes that there was nowhere to go but up.

As part of the ceremony, Joe and Tami unchained each other while speaking of their commitment to one another and the marriage. A big Thank You to Joe for making Tami's extreme wedding dreams come true. 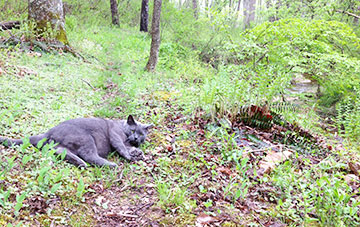 Tami, Joe, new rescue pup Khronos, and cats Una, Tootie, and Princess Vivian (a foster cat who came with the house but shows no signs of leaving) live in her dream home on 35 wooded acres in Culpeper County, Virginia. They share the land with bears, coyotes, foxes, deer, snakes, a gorgeous river, and a stream with a trail.

Their beloved formerly-chained shepherd Sloan passed away in May 2015.

Tamira is the founder and former Director of Dogs Deserve Better; today she works as an author, freelance art director, publisher, and activist from her home in the beautiful Virginia countryside.

Tamira grew up on a farm in rural Pennsylvania, where she has fond memories of exploring the woods, riding bikes with her brother, and loving on the animals who shared the farm.

After graduating from Cambria Heights High School, she went on to Penn State for 1.5 years, and then into the Air Force as a cryptologic linguist.

She spent almost five years in the Air Force, enjoying the travel, her Air Force compadres, and the study of the Czech language. She was stationed in Augsburg, Germany, Monterey California, San Angelo, Texas, and finally ending up in Fort Meade, Maryland.

She was promoted to Staff Sergeant upon first eligibility, and was honorably discharged after serving her first and only term. She then finished her degree at the University of Maryland, earning a Bachelor's Degree in Visual Arts.

She worked for the Maryland Pennysaver in their graphics department, then moved to Diamond Comics, Gura Labar Advertising, and Florida where she worked as an art director at a local agency and freelance book designer for Rowman and Littlefield Publishing.

She bought a home in Pennsylvania and created her own graphic design enterprise, Crescent Communications, where she designed books and other art direction projects from her home office.

She wanted to make a difference in the world, however, and design just didn't fulfill that need. She began a search for her mission in life, and an image of the chained dog up the road (named Worthless) kept coming into her mind. She knew God wanted her to help these dogs, but she was scared and it seemed too hard.

She finally acquiesced, and formed Dogs Deserve Better in 2002, which was the first organization to really take on the sole issue of dog chaining. Today the issue remains the focus of the nonprofit.

Thirteen years later, Dogs Deserve Better has its own rehab center, and Tamira has continued to study, learn, and work to make the world a better place. She has been through online bullying and defamation due to others who are so unhappy with themselves that they seek only to destroy those they perceive as having more; this has given her a passion to help victims of online bullying.

Tamira has persevered, and sometimes—as the AA saying goes— takes one single day at a time. Today she is blessed with the love of a wonderful husband, two amazing children who she adores, good friends, and incredible animals to share her life with.

To contact Tamira, you may reach her through her e-mail address.